Livraison offerte des 79 € (France metropolitaine) | -10% premiere commande
Free delivery from 79 € purchase -10% off your first purchase -10% off your first order
How can we describe the hull structure of the Mini 6.50’s rounded bow, designed by the naval architect and skipper, David Raison ? Provocative, inelegant… but so efficient ! Ino-Rope explains to you why and in which situations it is better to have a boat with a rounded bow, rather than a pointed one.

With his upper-hand victory, on 30 October, 2011, in the Transat 6.50, on board TeamWork Evolution 747, David Raison wrote a new page in the history of naval architecture and put an end to rumours that had raised doubts about his Mini’s round bow in rough seas. Since its launch in 2010, this really atypical prototype had, however, already shone with top ranking. But it was not until her spectacular victory in Salvador de Bahia that everyone agreed – or almost! Since, his boat, nicknamed Magnum, referring to the shape of the well-known ice-cream sticks, as soon as she was launched has had numerous occasions to prove her power at any point of sail, no matter the wind or sea conditions. Why is such a technological revolution possible today ? 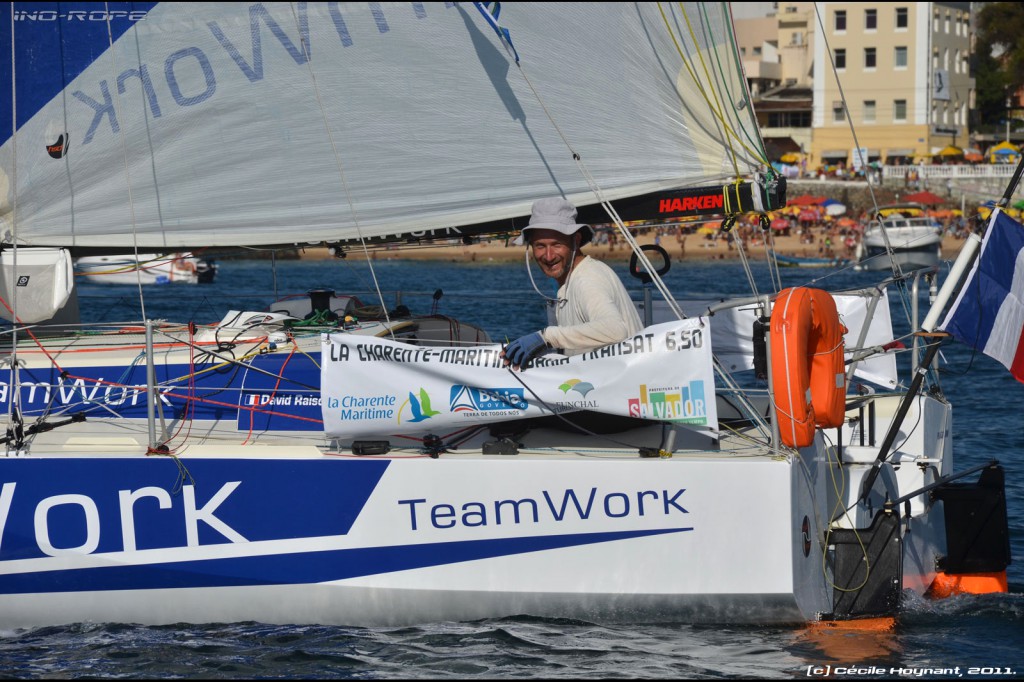 Although the Magnum displays nice curves, it is nonetheless, ultra-light. Like all racing boats that are at least twenty years old, it is a machine born to plane. The advent of carbon and textile fibres has enabled a significant reduction in the weight estimate of the hull as well as the rigging. The Magnum belongs to the latest generation of boats with lightship displacement. Unlike heavy boats that are archimedean (supported by Archimedes’ principle), it does not push water, but rises above it. This is the famous planing start that makes adrenalin and the speedometre shoot up! A sailing boat that planes is no longer slowed down by the speed of her hull (2.4√waterline length for those who love formulae). It is easy to work out the aim of the game: make an early planing start to gain as much speed as possible.

For the last fifteen years approximately, architects have designed lighter boats with a wider and flatter aft shape to favour planing starts and a stable form (like a polystyrene sheet that would be more stable on the water than a bottle spinning on the spot). The hull then behaves like an aircraft wing, which, carried by its speed, rises above the water. In no time, the straight line designs and the accentuated chines, which allow the virtual increase of boat width, became standard in the racing world, to such an extent that sailing boats began to look like windsurfs or huge surf boards. At the same time, architects tended to taper bows, in order to optimise penetration in the water. 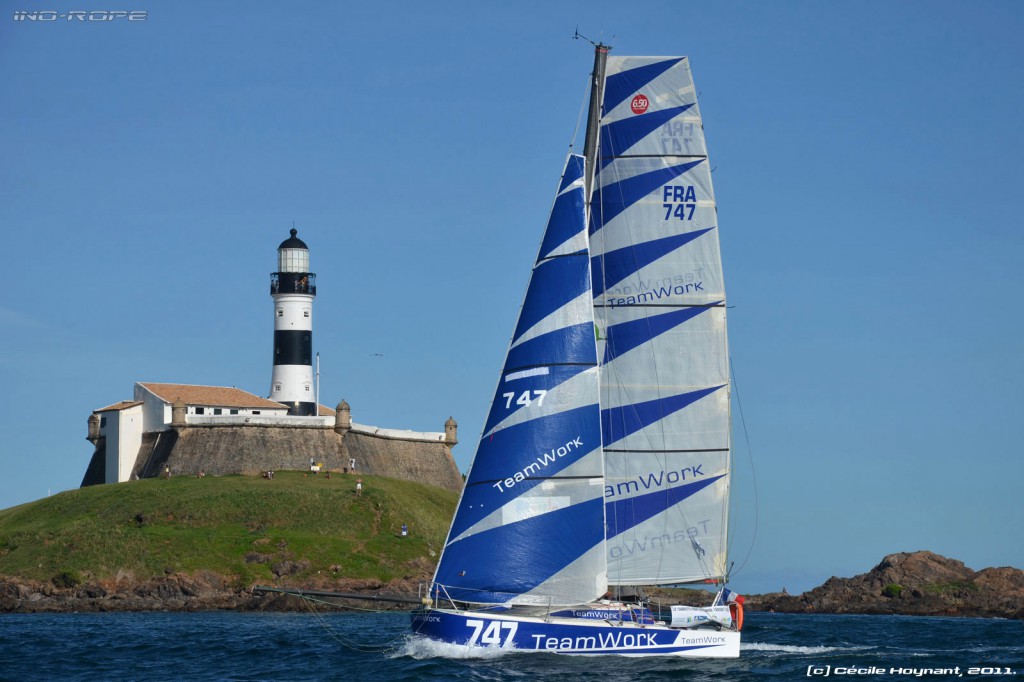 Get the power up front

Then, David Raison hit the highway against the flow, imagining that we could replace narrow water penetration by a really rounded bow. This visionary architect must have felt a bit like a modern day Galileo. A rounded bow shape? How is that possible? Yet, the basic idea makes a lot of sense. As for the power that used to be drawn from the aft, David Raison simply went forward to obtain it! Simple enough, but somebody had to think of it! By clearly widening the bow, David Raison increased stability of form, in applying exactly the same principle, which led architects to design sharp lines and large at the aft. When one sees it sailing alongside other Mini 6.50 boats, the Magnum has a heeling angle of less than 5° with an equivalent sail surface. The gain of power is obvious.

Some doubted the boat’s capacity to progress in rough seas, with the bow acting as a wall facing the waves. But, in the end, it was noticeable that Magnum reaches planing so quickly that the boat remains constantly above the water and this prevents it from hitting the waves. One must also bear in mind, that once the boat is heeling over, the bow’s shape facing the sea is much less rounded than when the sailing boat is flat on the water. Above all, as the bow is out of the water, the boat is much more manageable when steered. Explanations: an immersed V-shaped bow creates an anti-drift surface that acts like a break when the helm is manoeuvred. The Magnum is freed from this resistance and pivots on its axis effortlessly. Thus, the boat is extremely manageable, as it reacts immediately to the helm, which makes it much easier to handle the waves. On the other hand, steering requires intense concentration and the “moped” soon becomes as slippery as soap ! 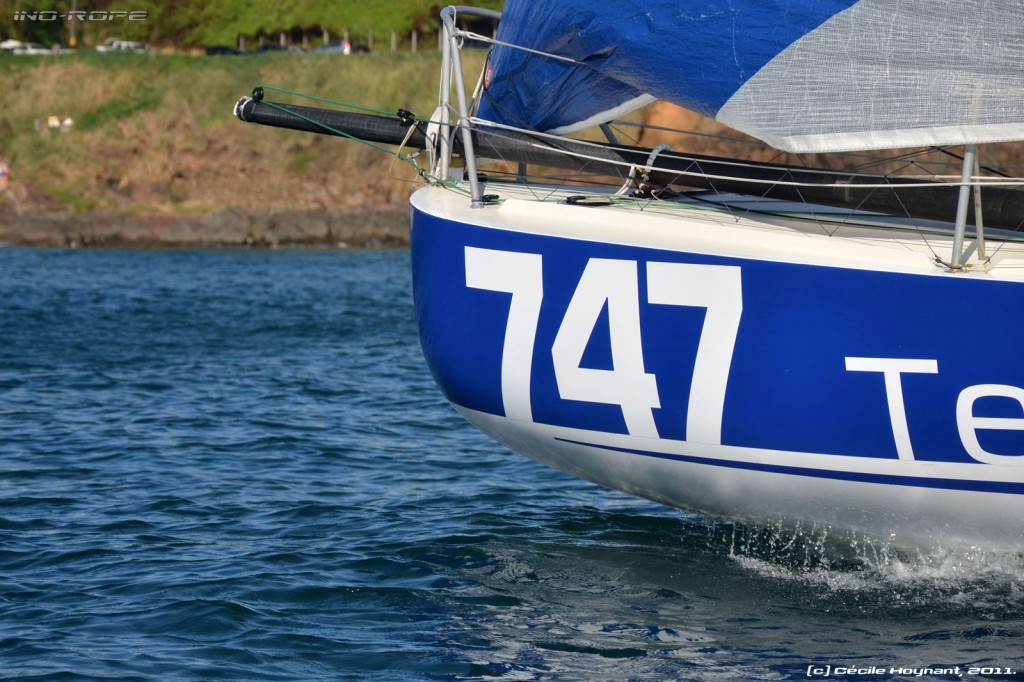 The axis between keel and hull structure is respected.

Finally, the Magnum’s increased speed is due to the shape of her hull, when heeling. With a sailing boat’s “classical” tapered bow, the shape of the hull structure (the immersed part of the hull) is not at all the same when heeling or when flat on the water. The axis of the hull structure is no longer the same as that of the keel: the aft shifts towards the side whereas the bow hardly moves. The more significant the difference in width is between boat aft and forward, the more offset there is, which is the case for recent racing sailing boats with their V shaped, flared bows and large, flat aft lines. By designing a very wide bow, David Raison practically resolved the problem of hull structure being out of alignment, which creates resistance, thus hindering progression. When the Magnum heels, there is no conflict between the water flow around the keel and the water flow around the hull structure: one less constraint and one more point scored by David Raison !

A featherweight for taking off

Give to Caesar what belongs to Caesar. David Raison did not start with a blank page either. With their truncated bow (“flat nose”), the Optimist and the Fireball, which were and still are the rage, are clearly the forerunners of the Magnum. The resemblance between the bow of the Magnum and that of the Scows is even more striking. This may be true, except for the fact that these American boats sail only on lakes and would not have been able to face the seas. Overall, what really makes the difference is the weight displayed on the scales. The Boeing 747 (another nickname given to David Raison’s Mini whose hull number 747, led to comparing her shape to an aircraft’s) was only able to take off thanks to her light weight, her full carbon hull and her Dyneema standing and running rigging. It comes as no surprise that David Raison had chosen the Mini 6.50 to give life to his ideas, as the size of these boats makes them real rockets, which from 8 knots at reaching, start planing !

From Magnum to Maximum

In April 2014, David Raison went one step further in terms of architectural innovation, by conceiving the Maximum, an evolution of the Magnum.