These last years, friction rings have taken over the decks of racing boats. Cost-effective, they have rapidly become commonplace in the world of leisure yachting. Weight-saving, resistance, performance: Ino-Rope compares their technical properties to those of blocks to help you to choose the best deck fitting parts. 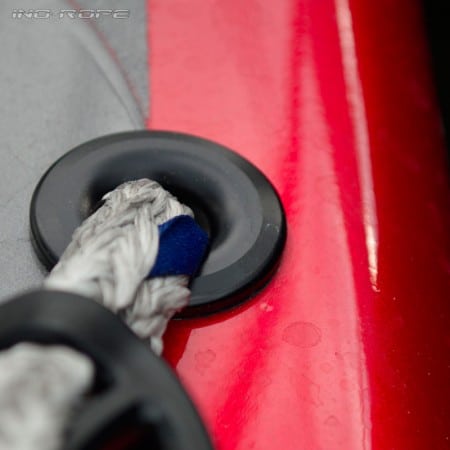 Friction rings, do they embody lightness?

Even though the working load of a friction ring is much higher than that of a block, the latter is more efficient in terms of friction. Because a block is a sheave that rotates around an axle (transmission of a movement), the rubbing is minimal compared to that which occurs due to rope that passes through a friction ring. For a rope that goes back and forth through a ring at 180° (two-strand block and tackle), the loss of load is of about 45%! As a comparison, a ceramic ball bearing block (the must) with a classic ball bearing and a standard friction block, would respectively lead to a loss of load from 2%, 5% et 10%.

P
An excellent weight/resistance ratio: The friction ring is 10 times lighter than a block with an equivalent breaking load.
O
The performance of a friction ring is inferior to that of a block: the rubbing leads to a loss of load of approximately 45%.

The friction ring has existed for ages: on board classic yachts, it is named “bull’s eye”. Nothing new, except for the materials that have evolved !

It is smooth, it slides…

Compared to a block, a friction ring is much lighter but also much more affordable. Although it is 10 times lighter than a block with equivalent resistance, it costs 10 times less! Indeed, its fabrication cost remains very low. Be careful, all rings do not have the same performance properties: the smoother and harder the metal is, the less friction there is.

The performance and lifespan of a friction ring depends on the quality of the anodising. Anodising is an electrolytic treatment which covers the aluminium with a protective coat. The ring is immersed in an acid bath in which an electric current circulates, generating an alumina deposit. This deposit generates a protective coat against corrosion and increases the hardness of the metal. As the quality of the anodising represents half of the ring’s price, do not choose the cheapest, if you are looking for performance.

P
An affordable fitting part: a friction ring is 10 times cheaper than a block, with an equivalent breaking load.
O
The cheapest friction rings provide limited performance.

Friction rings are like jewels: They must shine! The difference in quality is visible by the gloss of the surface.

The right cover to optimise performance 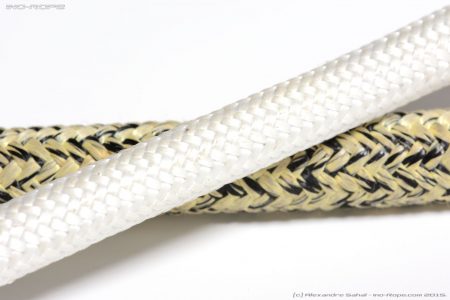 For a two strand block and tackle (180° back and forth in a friction ring) the loss of load due to friction is about 45%. These measurements, realised during testing on our tensile test bench, were obtained with a rope made of polyester. This loss would be significantly lower than with a Dyneema® rope and higher than with a Kevlar® one. In addition to choosing top range friction rings (with high quality anodising), you can also limit friction by choosing a rope whose fibres have sliding properties. To this effect, avoid ropes containing Aramids (Kevlar®, Technora®), whose high friction coefficient decreases the friction ring’s performance. These fibres are often used for the fabrication of covers; their excellent resistance to heat and abrasion efficiently protects ropes from wear. On the contrary, polyethylene high modulus, commonly called Dyneema® or Spectra ®, is ideal for mounting blocks and tackles with friction rings because this fibre is particularly smooth and slides easily.

P
High modulus polyethylene (Dyneema®, Spectra®) is the ideal fibre for friction rings because it slides easily.
O
Covers containing Aramids (Kevlar®, Technora®) are very solid but reduce the ring’s performance because of their high friction coefficient.

Aramids (black or yellow in colour) redden under a flame when burning. Dyneema® expands and emits a smell of wax. Polyester melts, retracts and blackens.

Deflecting or setting, that is the question! 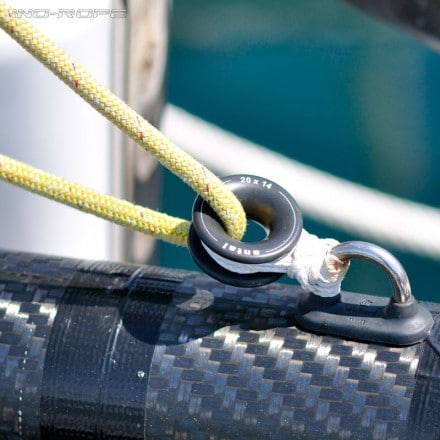 Because of rubbing, the best friction rings used with the most slippery Dyneema® rope will never be more efficient than a standard block. Even if the friction rings are lighter, more resistant (heavy working loads) and more cost-effective, they cannot replace all the blocks. They are not suitable for block and tackle systems requiring frequent adjustment (mainsail sheet, backstays…), as the loss of load due to friction is much too high (approximately 45% each time it goes through a ring). It is advised to use them only for static loads, meaning when a rope needs to be deflected and is rarely adjusted, once it is under tension. The tack on an asymmetric spinnaker that is tautened without load before hoisting the spinnaker, is a good example of static load.

P
Lightweight, resistant and inexpensive, the friction ring can replace a block for all static loads (asymmetric spinnaker tack, reefing lines).
O
Friction rings are not suitable for manoeuvres that require frequent adjustment (mainsail sheet block and tackles, backstays).

While racing or cruising, remember to have different size friction rings on board: In case of damage, they are extremely useful to replace a block !
Click on this link to find all our Ino-Rope products: https://shop.inorope.com/categorie-produit/produits-ino-rope/

Our selection of low friction rings